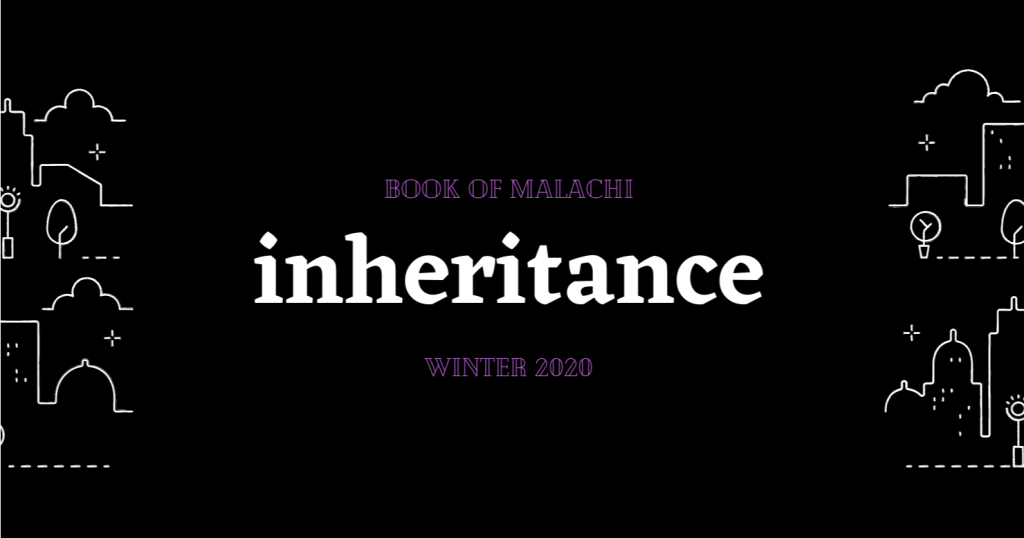 Malachi, whose name means “messenger”, came with the oracle or burden of the Lord. What was God’s burden to His people of Malachi’s day? Wholehearted worship that leads nations to Him – this is His great desire (Mal 1:11).

The people had returned from exile and had a form of godliness but were denying the power. They looked good but were quick to make small compromises and dilute true worship.

As we return to life amidst the pandemic, Jesus is looking for whole-hearted, pure worship from every man, woman, and child. How we seek Him, give to Him, walk in relational faithfulness, serve Him and others, embody Biblical justice, and find our deepest satisfaction in devotion to Him… these are the things Jesus is after.

This is His inheritance within us. Will He have it in you?

5 Your own eyes shall see this, and you shall say, “Great is the LORD beyond the border of Israel!”

2:1 “And now, O priests, this command is for you. 2 If you will not listen, if you will not take it to heart to give honor to my name, says the LORD of hosts, then I will send the curse upon you and I will curse your blessings. Indeed, I have already cursed them, because you do not lay it to heart. 3 Behold, I will rebuke your offspring, and spread dung on your faces, the dung of your offerings, and you shall be taken away with it. 4 So shall you know that I have sent this command to you, that my covenant with Levi may stand, says the LORD of hosts. 5 My covenant with him was one of life and peace, and I gave them to him. It was a covenant of fear, and he feared me. He stood in awe of my name. 6 True instruction was in his mouth, and no wrong was found on his lips. He walked with me in peace and uprightness, and he turned many from iniquity. 7 For the lips of a priest should guard knowledge, and people should seek instruction from his mouth, for he is the messenger of the LORD of hosts. 8 But you have turned aside from the way. You have caused many to stumble by your instruction. You have corrupted the covenant of Levi, says the LORD of hosts, 9 and so I make you despised and abased before all the people, inasmuch as you do not keep my ways but show partiality in your instruction.”

2:1 So put away all malice and all deceit and hypocrisy and envy and all slander. 2 Like newborn infants, long for the pure spiritual milk, that by it you may grow up into salvation—3 if indeed you have tasted that the Lord is good.

4 As you come to him, a living stone rejected by men but in the sight of God chosen and precious, 5 you yourselves like living stones are being built up as a spiritual house, to be a holy priesthood, to offer spiritual sacrifices acceptable to God through Jesus Christ. 6 For it stands in Scripture:

“Behold, I am laying in Zion a stone,
a cornerstone chosen and precious,
and whoever believes in him will not be put to shame.”


7 So the honor is for you who believe, but for those who do not believe,

“The stone that the builders rejected
has become the cornerstone,”

“A stone of stumbling,
and a rock of offense.”


They stumble because they disobey the word, as they were destined to do.

9 But you are a chosen race, a royal priesthood, a holy nation, a people for his own possession, that you may proclaim the excellencies of him who called you out of darkness into his marvelous light. 10 Once you were not a people, but now you are God’s people; once you had not received mercy, but now you have received mercy.

11 Beloved, I urge you as sojourners and exiles to abstain from the passions of the flesh, which wage war against your soul. 12 Keep your conduct among the Gentiles honorable, so that when they speak against you as evildoers, they may see your good deeds and glorify God on the day of visitation.