Gospel Family on Mission • Dreaming with the Beloved 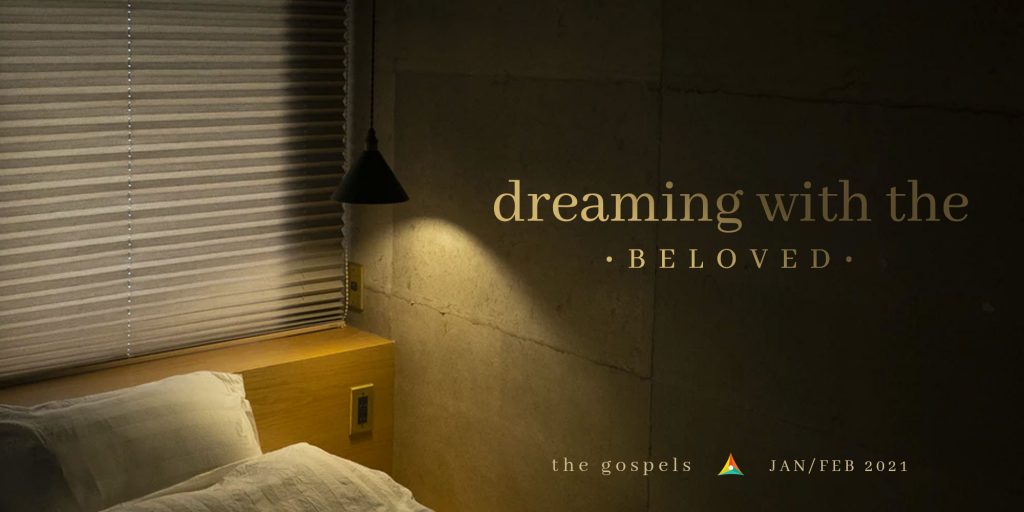 Gospel Family on Mission • Dreaming with the Beloved

What are the dreams or desires of Your heart, Jesus?

The Father made it clear. “This is My Beloved Son, in whom I am well pleased”. As Jesus rose from His baptism and was transfigured on the mountaintop, the Father’s heart’s desires found their “Yes and Amen” in Beloved God-Man, Christ the Son.

But what has moved the Son of God’s heart? What has the Beloved set His longing upon and will we join Him?

As we start our 6th year as a gathered church family, we take time to revisit the vision – dreams the Beloved laid upon the heart of His people known as LegacyPoint – a part of His beloved people. Revisit the call with us upon all believers’ hearts as we peer into the life of the God-Man.

Beloved Church, will you dream with the Beloved?

The opening of this sermon was cut short. The first portion is a church-wide reflection on 2 questions regarding this list of the 59 One Another’s in the NT (click here to see document):

1) What sticks out to you about this list?
2) What environment or way of life is most conducive to live these out?

42 And they devoted themselves to the apostles’ teaching and the fellowship, to the breaking of bread and the prayers. 43 And awe came upon every soul, and many wonders and signs were being done through the apostles. 44 And all who believed were together and had all things in common. 45 And they were selling their possessions and belongings and distributing the proceeds to all, as any had need. 46 And day by day, attending the temple together and breaking bread in their homes, they received their food with glad and generous hearts, 47 praising God and having favor with all the people. And the Lord added to their number day by day those who were being saved.

12:1 Therefore, since we are surrounded by so great a cloud of witnesses, let us also lay aside every weight, and sin which clings so closely, and let us run with endurance the race that is set before us, 2 looking to Jesus, the founder and perfecter of our faith, who for the joy that was set before him endured the cross, despising the shame, and is seated at the right hand of the throne of God.

16 All Scripture is breathed out by God and profitable for teaching, for reproof, for correction, and for training in righteousness, 17 that the man of God may be complete, equipped for every good work.

22 Having purified your souls by your obedience to the truth for a sincere brotherly love, love one another earnestly from a pure heart, 23 since you have been born again, not of perishable seed but of imperishable, through the living and abiding word of God; 24 for

“All flesh is like grass
and all its glory like the flower of grass.
The grass withers,
and the flower falls,
25   but the word of the Lord remains forever.”


And this word is the good news that was preached to you.

15 He is the image of the invisible God, the firstborn of all creation. 16 For by him all things were created, in heaven and on earth, visible and invisible, whether thrones or dominions or rulers or authorities—all things were created through him and for him. 17 And he is before all things, and in him all things hold together. 18 And he is the head of the body, the church. He is the beginning, the firstborn from the dead, that in everything he might be preeminent. 19 For in him all the fullness of God was pleased to dwell, 20 and through him to reconcile to himself all things, whether on earth or in heaven, making peace by the blood of his cross.

15 “If you love me, you will keep my commandments. 16 And I will ask the Father, and he will give you another Helper, to be with you forever, 17 even the Spirit of truth, whom the world cannot receive, because it neither sees him nor knows him. You know him, for he dwells with you and will be in you.

1:1 That which was from the beginning, which we have heard, which we have seen with our eyes, which we looked upon and have touched with our hands, concerning the word of life—2 the life was made manifest, and we have seen it, and testify to it and proclaim to you the eternal life, which was with the Father and was made manifest to us—3 that which we have seen and heard we proclaim also to you, so that you too may have fellowship with us; and indeed our fellowship is with the Father and with his Son Jesus Christ. 4 And we are writing these things so that our joy may be complete.

17 And when it was evening, he came with the twelve. 18 And as they were reclining at table and eating, Jesus said, “Truly, I say to you, one of you will betray me, one who is eating with me.” 19 They began to be sorrowful and to say to him one after another, “Is it I?” 20 He said to them, “It is one of the twelve, one who is dipping bread into the dish with me. 21 For the Son of Man goes as it is written of him, but woe to that man by whom the Son of Man is betrayed! It would have been better for that man if he had not been born.”

22 And as they were eating, he took bread, and after blessing it broke it and gave it to them, and said, “Take; this is my body.” 23 And he took a cup, and when he had given thanks he gave it to them, and they all drank of it. 24 And he said to them, “This is my blood of the covenant, which is poured out for many. 25 Truly, I say to you, I will not drink again of the fruit of the vine until that day when I drink it new in the kingdom of God.”

13:1 Now before the Feast of the Passover, when Jesus knew that his hour had come to depart out of this world to the Father, having loved his own who were in the world, he loved them to the end. 2 During supper, when the devil had already put it into the heart of Judas Iscariot, Simon’s son, to betray him, 3 Jesus, knowing that the Father had given all things into his hands, and that he had come from God and was going back to God, 4 rose from supper. He laid aside his outer garments, and taking a towel, tied it around his waist. 5 Then he poured water into a basin and began to wash the disciples’ feet and to wipe them with the towel that was wrapped around him. 6 He came to Simon Peter, who said to him, “Lord, do you wash my feet?” 7 Jesus answered him, “What I am doing you do not understand now, but afterward you will understand.” 8 Peter said to him, “You shall never wash my feet.” Jesus answered him, “If I do not wash you, you have no share with me.” 9 Simon Peter said to him, “Lord, not my feet only but also my hands and my head!” 10 Jesus said to him, “The one who has bathed does not need to wash, except for his feet, but is completely clean. And you are clean, but not every one of you.” 11 For he knew who was to betray him; that was why he said, “Not all of you are clean.”

12 When he had washed their feet and put on his outer garments and resumed his place, he said to them, “Do you understand what I have done to you? 13 You call me Teacher and Lord, and you are right, for so I am. 14 If I then, your Lord and Teacher, have washed your feet, you also ought to wash one another’s feet. 15 For I have given you an example, that you also should do just as I have done to you. 16 Truly, truly, I say to you, a servant is not greater than his master, nor is a messenger greater than the one who sent him. 17 If you know these things, blessed are you if you do them. 18 I am not speaking of all of you; I know whom I have chosen. But the Scripture will be fulfilled, ‘He who ate my bread has lifted his heel against me.’ 19 I am telling you this now, before it takes place, that when it does take place you may believe that I am he. 20 Truly, truly, I say to you, whoever receives the one I send receives me, and whoever receives me receives the one who sent me.”

21 After saying these things, Jesus was troubled in his spirit, and testified, “Truly, truly, I say to you, one of you will betray me.” 22 The disciples looked at one another, uncertain of whom he spoke. 23 One of his disciples, whom Jesus loved, was reclining at table at Jesus’ side, 24 so Simon Peter motioned to him to ask Jesus of whom he was speaking. 25 So that disciple, leaning back against Jesus, said to him, “Lord, who is it?” 26 Jesus answered, “It is he to whom I will give this morsel of bread when I have dipped it.” So when he had dipped the morsel, he gave it to Judas, the son of Simon Iscariot. 27 Then after he had taken the morsel, Satan entered into him. Jesus said to him, “What you are going to do, do quickly.” 28 Now no one at the table knew why he said this to him. 29 Some thought that, because Judas had the moneybag, Jesus was telling him, “Buy what we need for the feast,” or that he should give something to the poor. 30 So, after receiving the morsel of bread, he immediately went out. And it was night.

31 When he had gone out, Jesus said, “Now is the Son of Man glorified, and God is glorified in him. 32 If God is glorified in him, God will also glorify him in himself, and glorify him at once. 33 Little children, yet a little while I am with you. You will seek me, and just as I said to the Jews, so now I also say to you, ‘Where I am going you cannot come.’ 34 A new commandment I give to you, that you love one another: just as I have loved you, you also are to love one another. 35 By this all people will know that you are my disciples, if you have love for one another.”

35 And rising very early in the morning, while it was still dark, he departed and went out to a desolate place, and there he prayed.

17:1 When Jesus had spoken these words, he lifted up his eyes to heaven, and said, “Father, the hour has come; glorify your Son that the Son may glorify you, 2 since you have given him authority over all flesh, to give eternal life to all whom you have given him. 3 And this is eternal life, that they know you, the only true God, and Jesus Christ whom you have sent. 4 I glorified you on earth, having accomplished the work that you gave me to do. 5 And now, Father, glorify me in your own presence with the glory that I had with you before the world existed.

25 Consequently, he is able to save to the uttermost those who draw near to God through him, since he always lives to make intercession for them.